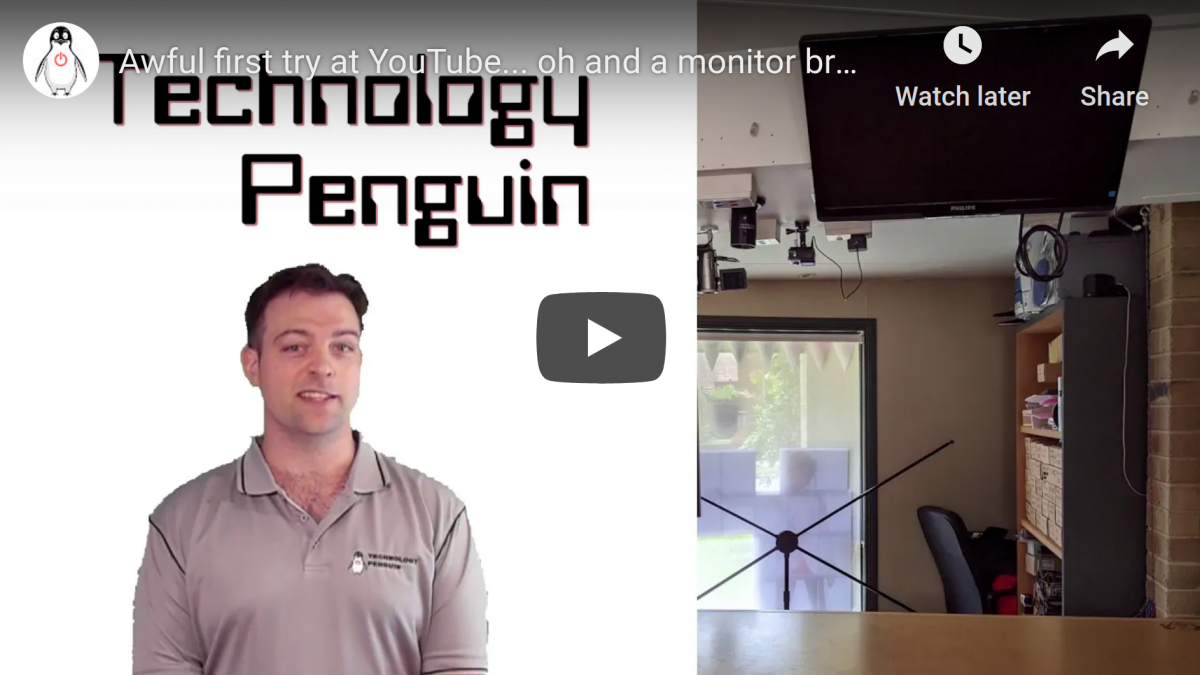 A few weeks ago I embarked on a project to record my first (hopefully of many) YouTube videos. The first video was planned to be test but still to be useful content. You can judge for yourself how useful it is.

Immediately on completion I felt the result was cringe-worthy at best. Having just re-watched it with fresh eyes before writing this article… it is still cringe-worthy but perhaps not as bad as I first thought.

What I have learned

Making this video was a deliberate learning exercise and I learned a lot. Much of what I learned was about video editing (in FlowBlade), which I will not expand upon too much here, but some lessons learned were more general such as…

I planned out a lot of what I wanted included in the video and figured that a script would save me time in the long run. It did but regardless of how many ‘takes’ I did, it was hard to make it sound natural.

I think this is a skill that I will develop over time but memorising the script may also help. I was using a makeshift ‘teleprompter’ (Google Slides and a Chromecast) for my lines as I felt memorising them would take too long.

Another possibility is to put general notes on the ‘teleprompter’ and improvise the dialogue. This may require more ‘takes’ but should sound more natural. However…

The middle section of the video, containing the actual modification, is the most natural sounding part of the video but it’s also the section with the most mumbling and stumbling (mistakes). The actual process of modifying the bracket was over 30 minutes of footage and I cut it down to about 6.5 minutes.

A lot of the cut material was elapsed time between action but an awful lot was cutting out improvised dialogue that made little sense. Even after all of those cuts there is still a number of mistakes I wish I could redo.

I think my lesson learned here is think about what you are saying and if you come out with something you really like, pause for a few seconds and repeat the dialogue or try some alternative ways of delivering it. This will give you more flexibility when editing the video.

Another possibility I am going to explore is having someone off camera asking questions. This could generate more interesting content and cause you to include information you may have taken for granted.

I have been blessed/cursed with a confusingly limited vocal range. I have quite a useful low range and I have a rarely used ‘falsetto’. Unfortunately I have nothing in between.

When I am addressing a crowd or simply talking loudly, my voice usually locks into the lower register. When I am reading to my kids and voicing different characters I can bounce my voice between high and low as required. My problem occurs when I speak conversationally.

For some reason, in normal conversation I decide to use the vocal range just below ‘no-mans-land’, putting me in danger of voice cracks. There are several examples in the video above.

I don’t know why I do it but after 20+ years I don’t even hear it… until it is played back. The cracks in this video are the most cringe-worthy aspects for me.

…but I want my videos to reflect me so I don’t want to start putting on an unnaturally low voice. It would feel, to me, like I was taking the piss.

I think the only answers for me are to try presenting with a louder voice or just come to grips with my voice cracks. A better microphone might also help.

I have a few different cameras on hand for recording video:

Of these devices, my phone and GoPro record video at 1080p, the webcam records a low frame rate (7.5 fps) super VGA (1280×1024) and the camcorder records 576i. Based on these specs the camcorder looks to be nigh on worthless. However the model I have has a ‘telemacro’ feature and 10x optical zoom and I have found it useful for super-closeup footage. I have also found that the quality of the audio recorded by the camcorder is better than from the other devices. Consequently most, if not all, the dialogue in my video has come from the camcorder media.

The webcam was an awkward resolution and frame-rate but it was easily mounted to the top of a monitor. I could record video while displaying it on the monitor as a reference. In the comparison section of the video I swapped out the webcam for my phone mounted in a $20 tripod stand I bought from Kmart. The video quality was better but not having the monitor as a reference meant I did not often look towards the camera. The next time I record from my phone I plan to cast my screen to a nearby monitor to address this.

The GoPro is handy for the wide, overhead view but adjusting for the fish-eye lens required some editing in Flowblade. When you correct for the lens, you lose some of the perimeter of the footage so in the first half of the video the action was right at the bottom of the screen. You may notice I adjusted the position of the GoPro for the second half of the video.

Aside from all of the individual benefits of each device the best idea I had was to record from all cameras simultaneously. Once I had all cameras recording I did a single loud clap to help me sync the videos together. By having full recordings from each angle I could add them all as separate video tracks and then switch between them as needed, use them to disguise an edit or use other effects like picture-in-picture.

I’m not going to delve too deeply into video editing in this post but I do want to touch on a few things I learned.

As self-conscious as I am about my first YouTube video I think it was a good exercise. I learnt a lot and I will be making more of them.

Please stay tuned because I recently purchased a Snapmaker 2.0 3-in-1 3D printer and I have been hold off setting it up while I learn how to ‘YouTube’. If all goes well it will be the source of many future videos.