I had an interesting job last week. A customer brought in a CCTV test monitor for repair.  The RCA video inputs had broken away from the input board and then reattached using a generous amount of solder. The result was intermittent picture drop-outs on both inputs.  After another attempted repair the ceramic fuse had blown. … END_OF_DOCUMENT_TOKEN_TO_BE_REPLACED 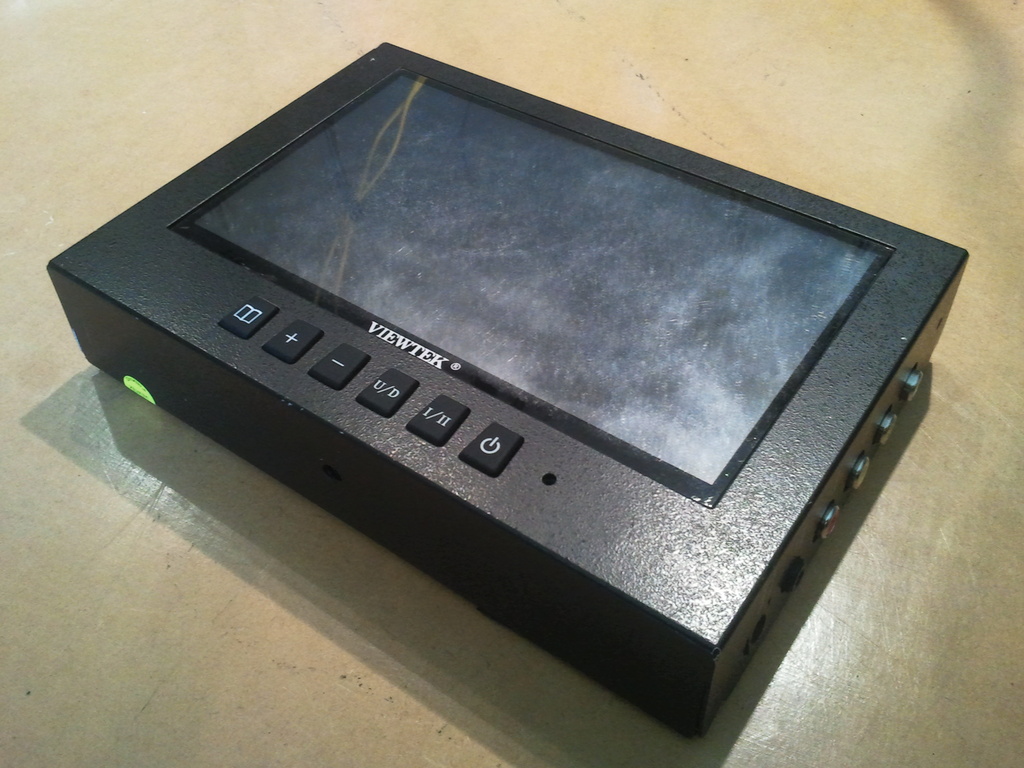 I had an interesting job last week. A customer brought in a CCTV test monitor for repair.

The RCA video inputs had broken away from the input board and then reattached using a generous amount of solder. The result was intermittent picture drop-outs on both inputs.

After another attempted repair the ceramic fuse had blown. The fuse was a through hole, soldered in component; hard to replace and hard to source.

On first inspection I noticed the mangled centre pins of the video input RCA sockets (two on the far right above) and I confirmed that the fuse (on the far left) was open circuit.

Not having designed the monitor myself and not even having a circuit diagram for it I looked for any other visible damage – scorch marks, damaged components, broken wires, etc. I found no obvious signs of damage so I prepared to bypass the fuse.

Given the lack of visible damage I assumed that the fuse had blown due to an input overload rather than an internal failure. Just in case I was wrong I used a single strand of wire to bridge the fuse. The single strand of wire should behave like a rudimentary fuse limiting the maximum amount of current that enter the device. It would probably let more current through that the original fuse but the fact was that if the monitor had an internal fault I was unlikely to be able to repair it anyway.

Luckily the monitor was working perfectly… so what to do? I figured that the smart choices were to implement a fuse-holder and fly-leads for the video inputs. The fuse holder allows fuses to be replaced easily and the fly-leads will eliminate stress on the input board to prevent future RCA socket damage.

The fuse holder I chose consists of two separate clips. One clip is soldered to each contact and the fuse is clipped between them. The flexibility of this type is that as long as the ends of the fuse contact with the clip, the distance between the clips doesn’t matter. The only hurdle left was how to fit the new fuse into the housing, the smallest standard fuse is still almost twice the size of the original.

The solution ended up being quite elegant. It turned out that there was exactly enough room to install the fuse on the opposite side of the input board.

The input board is dual layer, it has copper laminate on the top and the bottom. The fuse had pads on both layers with a via connecting them. All I had to do was remove the existing fuse, insert the clips in from the bottom and solder them on the top. The clips have two soldering pins. I clipped one off each of them and positioned them to allow for the mounting screw and to ensure contact with both ends of the fuse.

It turned out to be quite tidy, if I do say so myself.

With the fuse installed I check the continuity of the circuit and then reassembled the monitor to check its operation. All went well. The next step was the fly-leads.

For the fly-leads I chose basic RCA line sockets, a soft double insulated (round) cable and cordgrip clamps.

To begin I needed to de-solder the broken RCA sockets and almost immediately I ran into trouble.

The previous effort to repair the sockets involved a lot of solder on the centre pin. The ground pins on each socket de-soldered without too much fuss but when I attempted to de-solder the centre pins the pads began to de-laminate. On one centre pin the bottom pad tore away and on the other the top pad and the via tore out.

For the centre pin with the de-laminated bottom pad I carefully soldered the wire to the top pad. The connection was secure and the circuit was complete.

The pin where the top pad had de-laminated was trickier. I was able to solder the wire to bottom of the board but the connection was still broken as there was no longer a via to complete the circuit. With some careful soldering I was able to solder the wire directly to the track on the top of the board. That connection alone would be fairly fragile but the solder connection on the bottom of the board anchored it. Fortunately with the cordgrip clamps installed any tension on the cable will be taken by the case not the solder joints.

Finally it was time to reassemble the monitor. After nearly forgetting to install the fuse, I had it all together and up and running.

Both channels now work great and with no drop-outs. The fly-leads also work well with the case.